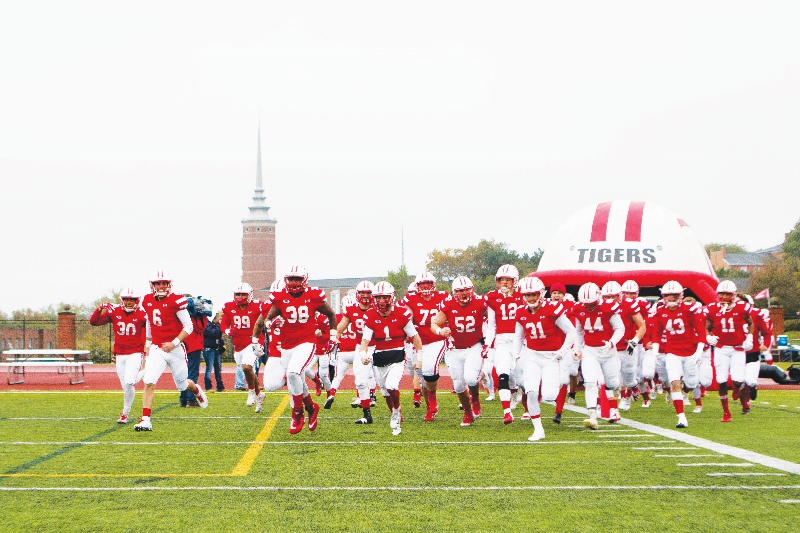 Simple Plan’s Newest Album Ties Together Both New and Old

Alexis Poliseno
Alexis Poliseno is the Managing Editor for The Torch this year. She is an education major seeking a teaching license in both early childhood (P-3) and as an intervention specialist (K-12). She has been on the staff since January of 2017.

When looking back at the 2019-2020 athletic seasons, the Tigers were successful year-round. Here is a look at some Tiger accomplishments from this year.

The football team, with five NCAA National Championships, 16 NCAC Championships and 193 All-Americans within their program, ended its season in November, at Wooster with a 27-21 victory. That win was the night that the Tigers were able to snag their 16 NCAC Championship title. The Tigers ended the season 9-1 overall after a tough loss to Wabash College on Senior Day. Those 10 games amounted to 145.5 yards rushed, 284.6 yards passed and 430.1 yards in total. The Tigers averaged 40.8 points per game and only allowed for approximately 23.1 points per game. Next year’s incoming freshmen have big shoes to fill.

The Tigers went all the way to the third-round of the NCAA tournament before falling to the Calvin College Knights in Grand Rapids, Mich. They currently have 23 NCAC Championships, and were 2011 NCAC Division III National Champions. In the 2018 season, the Tigers went 25-3 overall, 8-0 in conference. They averaged 13.37 kills, 12.49 assists, 2.49 blocks, 1.49 service aces and 18.88 digs per set. The team graduated five seniors at the conclusion of the season.

This season was a big one for the Tigers, as they went all the way to the NCAC Championship Tournament game. Going 6-9-4 for the season, the red and white went up against Wooster College, losing 4-0, after only taking five shots on the goal. The team scored a total of 16 goals in the 2018 season, averaging 10 shots per game and they are sending off six seniors.

The red and white wrapped up their 30-game season in the NCAA D-III Second Round against the Guilford Quakers with a 70-61 loss. They went 24-6, 14-4 in conference, and hit the 100-point mark against Emory University in the first round of the D-III tournament. The team averaged 82 points, 37.7 rebounds and 14.3 assists per game. They graduated their lone senior, Mitchell Balser, at the end of the season with five juniors currently rostered to step up next season.

The Tigers had 32 games under their belts by the conclusion of the season, making it all the way to the AMCC Tournament Championship, where they fell to the Thiel University Tomcats 3-1. They claimed their first ever Allegheny Mountain Collegiate Conference regular-season title. The red and white went 21-11 overall, 11-3 in the conference. The team averaged 11.93 kills, 11.11 assists, 2.14 blocks, 1.33 service aces and 10.53 digs per set. The team is graduating 10 seniors this spring.

The women’s water polo team had its inaugural season as a varsity sport on campus this year. They went 8-13 overall and 4-7 in conference play. The team went into the Collegiate Water Polo Association Championships and finished their season on April 14, against Grove City College, losing 11-9 in the fifth-place game.

The men’s golf team has continued its busy and successful season by earning the team title at the Strimer Memorial Tournament in Deleware, Ohio last week. This is the fifth time this season that the Tigers were so successful and was the third tournament expected in a row. With the NCAC and the NCAA Championships looming as we roll into May, the Tigers are preparing and practicing. If they conquer the NCAC Championship, it will be their 10th consecutive title. The women’s golf team has captured the first-place spot on two different occasions and is expected to capture second in the NCAC Championships that are coming in the next few weeks.

Women’s Soccer Heading into Saturday with a Win Against DePauw

Tigers Against the Lords

Daylight Savings Time: Is it Worth it?

Women’s Soccer Heading into Saturday with a Win Against DePauw

This website uses cookies to improve your experience while you navigate through the website. Out of these, the cookies that are categorized as necessary are stored on your browser as they are essential for the working of basic functionalities of the website. We also use third-party cookies that help us analyze and understand how you use this website. These cookies will be stored in your browser only with your consent. You also have the option to opt-out of these cookies. But opting out of some of these cookies may affect your browsing experience.
Necessary Always Enabled
Necessary cookies are absolutely essential for the website to function properly. This category only includes cookies that ensures basic functionalities and security features of the website. These cookies do not store any personal information.
Non-necessary
Any cookies that may not be particularly necessary for the website to function and is used specifically to collect user personal data via analytics, ads, other embedded contents are termed as non-necessary cookies. It is mandatory to procure user consent prior to running these cookies on your website.
SAVE & ACCEPT